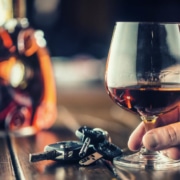 If you have been pulled over for DUI in Virginia, it is a frightening and unsettling experience.  During the stop, you may have been given some field sobriety tests (FST’s) and a Preliminary Breath Test (PBT) the police use to estimate your blood alcohol concentration (BAC) at the time you were stopped.

The field sobriety tests and preliminary alcohol screenings are used by the police to establish probable cause to place you under arrest. Although they may imply that you are required to submit to these tests, you have the right to refuse them, and it is generally in your best interests to do so. Keep in mind that the police officer already suspects that you are intoxicated and is looking for a reason to arrest you. This means that the officer is not likely to administer these tests fairly.

The DUI Arrest in Virginia

Whether you submit it to the roadside tests or not, the officer may decide to arrest you for drunk driving. The first thing they will do when they arrest you is read you your Miranda rights. Next, you will be taken to the police station. If there are no other licensed drivers with you who are sober, your car may also be towed, most likely to the police impound lot.

After you arrive at the station, you will be given the chemical (breath, blood, or urine) test that will be used to officially measure your BAC. Under Virginia’s implied consent law, you are required to submit to the chemical test. Refusal to do so is a civil violation that can result in the automatic suspension of your driver’s license for one year for a first offense. A second refusal becomes a misdemeanor and can result in your license being revoked for three years.

After you are arrested and booked for DUI in Virginia, you will most likely spend some time in jail. This could be a few hours up to an entire weekend if your drunk driving arrest occurs on a Friday night for example. Depending on the circumstances, you may have to post bail to be released, or you may be released on your own recognizance with the promise to appear at your DUI trial. In some rare cases, you may be held without bail.

What Happens after the DUI Arrest in Virginia?

Once you are released from jail, the nightmare is only beginning. You are now facing a criminal charge for DUI, as well as a separate and simultaneous DMV administrative proceeding regarding the suspension of your driving privileges. Your first court appearance is your arraignment. This might happen on the day of your arrest, or you may be given a date to appear within a few days. At the arraignment, the judge will read the charges against you, advise you of your right to hire an attorney, and ask if you want one appointed for you. You may also be asked how you are going to plead, or it may be assumed that you are going to plead not guilty. From there, a trial date is set, which is usually within about two months of the date of your arrest.

On the administrative side, you are looking at a seven-day driver’s license suspension if this is your first offense. For a second offense, the suspension period is 60 days or until your trial, whichever comes first. For a third or subsequent offense, your driving privileges are suspended until your trial. If you end up being convicted for DUI, your license is suspended for 12 months for a first offense, up to three years for a second offense, and up to five years for a third or subsequent offense. If you are convicted for first time DUI, you may be able to obtain a restricted license to drive to work, school, daycare, and DUI classes if you install an ignition interlock device and meet other requirements.

If you’ve been arrested and charged for drunk driving, you are facing very harsh consequences.  Being arrested does not mean you will automatically be convicted, however. With a strong defense, you may be able to have the charges reduced or dismissed altogether, depending on the circumstances.

At the Straw Law Firm, we have extensive experience successfully defending clients charged for DUI in Virginia. We can thoroughly analyze your case and put together the most effective defense strategy to mitigate the circumstances as much as possible. Call our office today at (434) 616-2760 for a personalized consultation or send us a message through our online contact form. You may also stop by our office in person at your convenience.